You are here: Home / Blog / Blog & Updates / Facial Aesthetics – The Myth of Symmetry 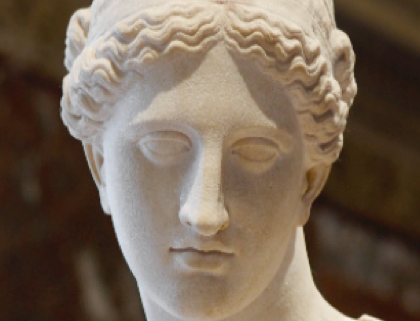 The concept of facial symmetry has become the main guiding principle of Cosmetic Medicine absorbed by many patients seeking aesthetic services. Establishing facial symmetry by all available means is being assumed to represent the path to absolute beauty and stamp of practitioner’s skills. Very few doctors, however, are aware of the true concepts of beauty and its representation in reality as evidenced by their continuous referral to the “Golden Rule” principles as the only learned option. In reality, however, what matters is not a particular number, eg. 1.6 in the Golden Ratio, but a concept that is much deeper and universal, a concept known since the beginning namely, the directional symmetry or antisymmetry.

The intuitive desire for symmetry and its indiscriminate implementation in facial aesthetics does not serve well most of the patients. An obsession with symmetrical “perfection” turns out quite disappointing and plain with features lacking originality. Consequently, many patients end up looking very similar with predictable traits of adjustments. The flaws of newly created symmetry may not be instantly obvious to many unless you look at the images before the changes were made. In reality, most of the natural asymmetry is an asset not to be disposed of.

Extensive research carried out in late 1800’s revealed that asymmetry is almost universal in human body, including head, particularly the face. Asymmetry of the head is manifested in various ways. Some typical examples are: 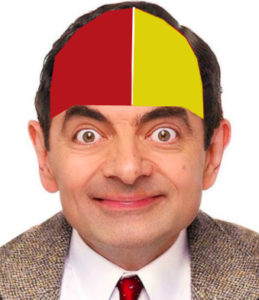 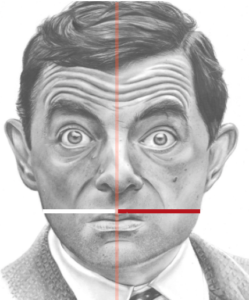 the left side of the face is wider than the right 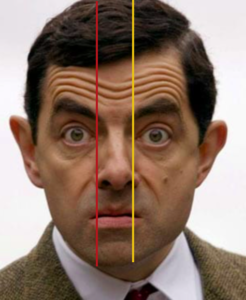 the right side of the face is longer than the left 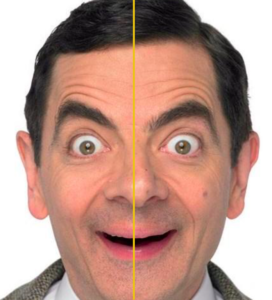 the nose is not in the vertical midline 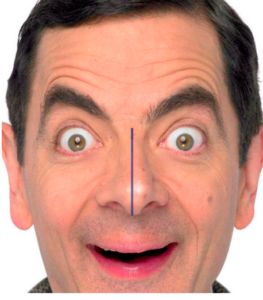 the tip of the nose is displaced to one side

There are many other asymmetries related to the structure of our skulls that make distances between the corresponding parts different on each side such as the distance between the outer corner of the eye and the corner of the mouth is not the same on both sides of the face or the left eye is closer to the vertical midline.

Studies by Hasse in 1800’s showed that facial asymmetry is clearly an essential part of Greek art that pioneered the concept of classic beauty with proportions thought to be based on mathematical principles. Venus de Milo, one of the most famous sculpture represents certain aspects of Hellenistic art combined with earlier ideas of the Classical style. Hasse’s findings show that the main features of her beautiful face defy the purist, those who defined this style as a perfect balance based of symmetry. At the time of his detailed evaluation of Venous face he performed the same measurements on his co-workers at his institute. To his surprise, all his subjects revealed exactly the same asymmetries as the main object of his study.

At the first glance, it appears that Venus’ face is perfectly symmetrical and that the symmetry brings an absolute balance to her face. Yet, on closer examination, if one measures her face using a simple grid it becomes evident that only the lower part of the face, her lips and chin, is symmetrical. 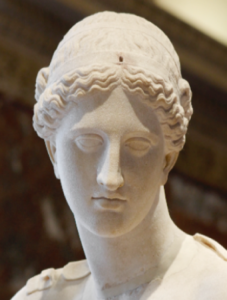 The parts in mid and upper face are asymmetrical on both sides, the nose is shifted to the right from the midline, the left ear sitting higher than the the right and the line connecting both pupils is not truly horizontal.

NONE OF THE ADULT BODY PARTS IS FORMED STRICTLY SYMMETRICAL

Many investigations and studies of the relationship between asymmetry and facial attractiveness have shown that “correction” of asymmetry creates “averageness” and perception of diminished natural beauty. Contrary to what some predicted, faces that were made more symmetrical were perceived as being less attractive, unemotional, predictable, and with sterile rigidity .

Here are few examples of asymmetry in well known faces. Compare George Cloony‘s real image on the left with images representing his face in total symmetry. These were created my making a mirror image of each side. The perfectly symmetrical features on image 2 and 3 lack character innate to his real face; both symmetrical images are predictable, boring and do not attract attention for more than a casual glance. 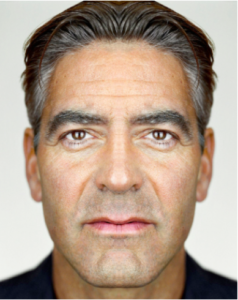 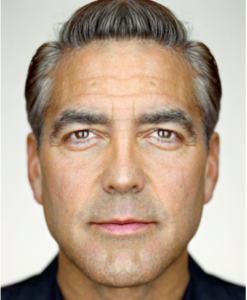 David Bowie with his very original physique becomes much less interesting if his features are subjected to symmetry. His distinctive brows, eyes, mouth and the outline of his face are lost along with his uniqness and character on the images 2 and 3 when absolute symmetry is created. 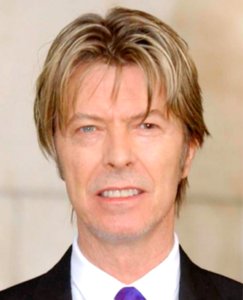 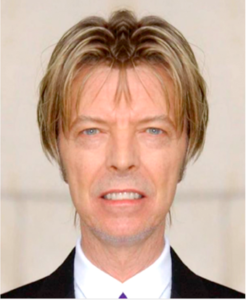 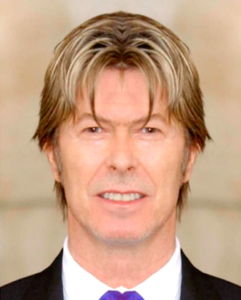 And my dear friend, Mr. Bean, may serve as a great example. When his face is made symmetrical on the images 2 and 3, it becomes dull, much less interesting and appear to be computer generated . Only his natural face holds larger than life diversity and brings about particular emotions created by his asymmetrical jawline and obviously larger left side of his face. 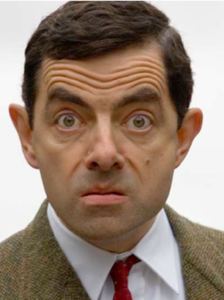 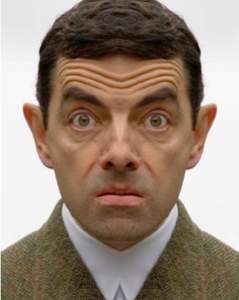 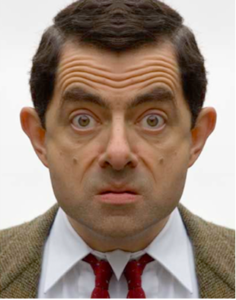 In summary, the natural facial asymmetry is, most of the time, a gift of nature giving us our distinctive appearance, uniqueness and enigma. Trying to establish a symmetry takes away our most important facial features and brings predictability and averageness; the face becomes one of many replicas.

In the comments of many cosmetic doctors the asymmetry is considered a must and the Golden Ratio a gospel. Many make a reference given to the “Marquardt mask”, or Golden Ratio mask. The mask is a grid that, if superimposed on the photograph of a face, will perfectly fit only a “perfect” face while revealing flaws of the “common” faces. Very few are aware, however, that the mask has significant design flaws and was discredited as a tool for aesthetics. Not only it fit perfectly many “common” faces and disregarded ethnic differences but it’s design was based on perfect facial symmetry and modeled on a very small, non-representative, population.

There are many patients who discover their asymmetry at certain stage of facial aging, the asymmetry that was there all along but not noticeable. With progressive facial volume loss the unnoticeable before asymmetry becomes more and more apparent with passing time. To address those concerns one must carefully approach the propose enhancements while resisting the idea of perfect symmetry that was never there. Otherwise, the results will be predictably unsatisfactory.

The key to any aesthetic enhancement lies in maintaining your natural beauty rather than attempting to create a perfect mask. To accomplish that, the manual skills are not enough; what is required is an understanding of spatial relationships between all elements and one’s individuality. Its a difference between the craft and art.

Want to join the discussion?
Feel free to contribute!

The History of Feminine Beauty